Solidity is an object-oriented language to write smart contracts that can be deployed on the blockchain, for instance, Ethereum. The syntax is similar to Javascript, but on the other hand, semantics is closer to C++. We will dig into Solidity language structure and functions from a Swift developer's perspective.

Before we jump into the Solidity language structure, we need to know what a pragma keyword is and what it means.

Unlike the Objective-C #pragma and Swift MARK, the' pragma' keyword in Solidity describes what version of the compiler should use. Keep in mind that it instructs the compiler to check if the versions do match. It does not turn on or off any language features.

For instance, if we would like to tell the Solidity compiler that we want to use the 0.8.x version, we can start the source file like this:

We can also use greater or smaller operations to describe even the version interval, which could be handy.

There are other ways to use the pragma keyword, but we won't look into that this time.

Solidity source files are saved with the .sol extension. 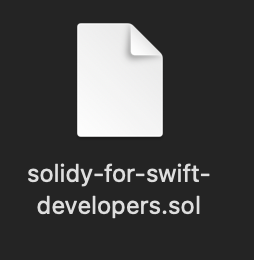 Everything starts with a Contract

Contracts in Solidity language are similar to classes in Swift. Contracts contain state variables, functions, function modifiers, events, errors, structs, and enums. This time we are only going to look into function structure.

Like classes, we need to name it and open, and close with braces.

State variables are variables that are declared inside the contract. Be aware that this information is stored on the blockchain contract storage once you deploy it. We don't need to worry about getters and setters. Solidity compiler generates that for us.

You can notice now that each execution line should end with the semicolon ;. That is not the case for the Swift language.

Functions can be declared inside and outside the contract, similar to Swift. They can execute a piece of code.

It is going on a lot, so let's break it down. If we want to access the state variable from outside, we need to set the visibility type to public and do the same for the function. In our case, the function returns something, and we can mark it as view. It returns a string that is stored in the memory and removed after the execution is finished.

The places, where the function variables and return data can be stored, are:

Functions in Solidity can execute instructions, view data. It can be a view or pure when we view the data. The difference between these two is that pure functions don't modify nor read the state variables.

In the code above, we are not reading nor changing anything on the blockchain but just returning some data.

Solidity is a language to write the smart contracts that can be deployed on the blockchain. The most popular currently is Ethereum. From a Swift developer's perspective, language is quite similar syntax-wise but very different semantics-wise. First of all, every execution line should end with a semicolon. In Solidity equivalent to the Swift classes are contracts that can contain state variables, functions, and other structures.